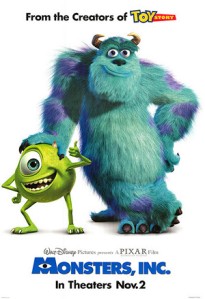 Monster Inc. is easily one of my favourite Pixar films, the reason being that at the time, and even now years later, it is a highly original film. Unlike Toy Story or Finding Nemo it isn’t just a story set in our world but from a different perspective; it is isn’t just a superhero film like The Incredibles. In my opinion only Inside Out can really compete with Monsters Inc. in terms of its originality.

For the film Pixar actually created an entirely new world; admittedly there are a lot of similarities between our world and the Monster’s world, but in the monster’s world there is a lot of diversity and that diversity isn’t questioned or discriminated. There’s some discussion about scariness, but as that is a vital part of the energy supply of the monster’s world and a central topic in Mike and Sully’s careers, it’s understandable that it comes up. I love watching the film just to spot how similar and how different our two worlds are, and how the interaction between the two is a vital cog for the monsters.

The entire premise though is that although it is vital cog, it is a very dangerous. Children are believed to be toxic, so when a door to a child’s room breaks and doesn’t shut down properly, resulting in Boo coming through to the Monster World, where they are more scared of children then children are ever likely to be scared of Monsters, the results are hilarious. The tender relationship that develops between Sully and Boo is great to see develop, and the tensions between Mike and Sully because of Boo make for great comedy.

Monsters Inc. is a brilliant film because of the originality and the great friendships you get to watch, as they battle a competitive villain.